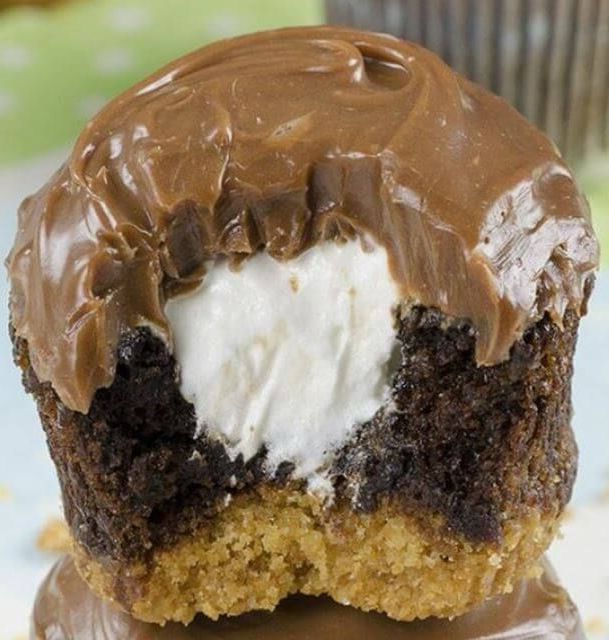 To make the crust:

Step 1: Preheat the oven to 325 degrees, and place a rack in the centre of the oven, then line cupcake tins with 16 cupcake liners and set aside.

Step 2: Combine graham cracker crumbs, sugar and melted butter in a small bowl and mix well with a fork. Then put about 1½ tablespoon of the mixture into the bottom of each cupcake liners and leave it to bake for 6 minutes, and set it to cool aside.

To make the cupcakes:

Step 3: Combine cocoa, sugar, flour, baking powder, baking soda, and salt in a bowl, add oil, milk, egg, and vanilla to the mixture. Beat with a hand-held electric mixer on medium speed for 2 minutes, and then add boiling water and beat again to combine.

Step 4: Divide the batter equally between cupcake liners, and pour over the crust. Bake for about 20-25 minutes, set aside to cool in pan, and then use a sharp knife to hollow out the centers of each cupcake.

Step 5: Whisk together egg whites, sugar and cream of tartar in a heatproof bowl over a pot of simmering water until the sugar dissolves. Continue to whisk over the simmering water until egg mixture is warm. Remove from the heat and continue beating until still peaks form. Then add vanilla and mix well.

Step 6: Put the filling into a piping bag with round tip, then cut off the corner and fill the cupcakes. Place the tops back to the centres of the cupcakes.

To make the ganache:

Step 7: In a small sauce pan, melt chopped milk chocolate with ½ tablespoon vegetable oil over low heat. Stir well until it is completely smooth, then remove the mixture from the heat and add cold heavy whipping cream and stir well until it is well mixed.

Step 8: Spread the ganache onto the cupcake using a spoon, store in the fridge until you’re ready to serve