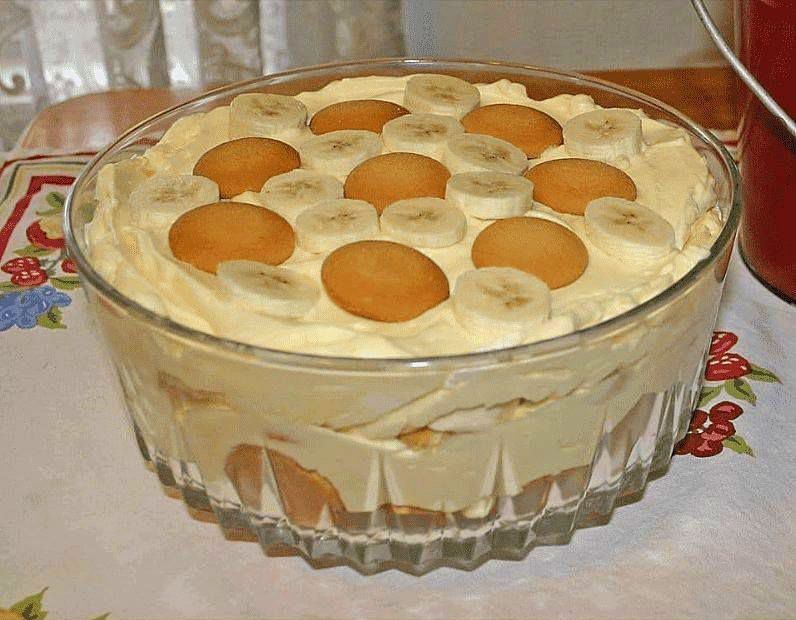 First get a mixing bowl and put together the vanilla pudding mix, milk, sweetened condensed milk, and then make sure that you whisk all of this to get the lumps out, and then let it sit in the fridge until the recipe sets, usually about five minutes

Get another bowl, combining the vanilla with the heavy cream, beating this until it has a stiff peak forming in it, usually about 3 minutes. Put half the mixture for topping and then fold the rest into the pudding mix that you were chilling before this

Cover the bottom of a trifle dish that’s three quarts with some vanilla wafers. Add a third of the pudding, then more cookies, which you may need to put it vertically along the dish edge, then top it with a layer of bananas over this.

Layer this entire mixture with the steps of the pudding, then the wafers then the bananas until you get to the top, and make sure it ends with the final layer being the banana pudding.

Put it in the fridge for minimally three hours, at most overnight.

Add sugar to the rest of the whipped cream left behind, stirring it so that it’s properly combined. Before you serve it, put a dollop on this over your banana pudding, and then put the wafer cookies you have left behind crumbled over the top of this.

Can I make my own homemade pudding?

You sure can! If you want to make your own and make it something personal, then you should do it. It’s hard though for you to find classic vanilla extract and vanilla beans that are whole, so definitely don’t be afraid to buy pudding if needed.