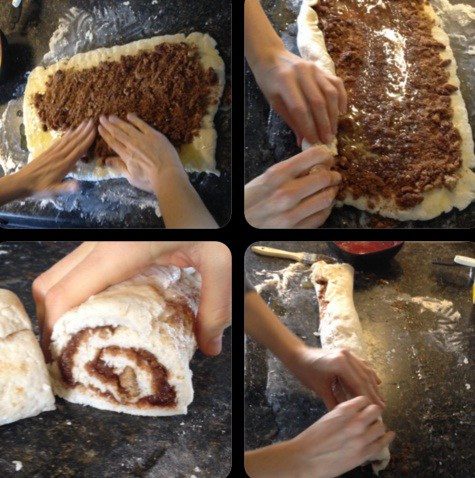 You’ll Need (for the rolls):

You’ll Need (for the frosting):

In a mixing bowl, mix together the bisquick, milk and 2 tbsps of sugar to form a dough and beat 20 strokes.
On surface sprinkled with bisquick, place the dough and roll to coat then shape into a ball and knead 10 times.
Pat the dough in a greased 15×9 rectangular pan. Spread the butter and sprinkle the mixture of cinnamon and 2 tbsps of sugar over the top. If you want, sprinkle the raisins on top. Roll up the dough tightly beginning at 15 in side. Pinch the edge of the dough into roll to seal.
Cut the roll into 12 1/1/4 inch slices and place cut sides down in the pan.
In a preheated oven to 375°, bake for 20 to 33 minutes.
Make the frosting and spread over the rolls once cooled.
Bonne Appétit!

Easy, peasy and delicious! I personally don’t like raisins, but as I heard, it goes very good with this bisquick frosted cinnamon rolls. Give this a try and let me know what you think!