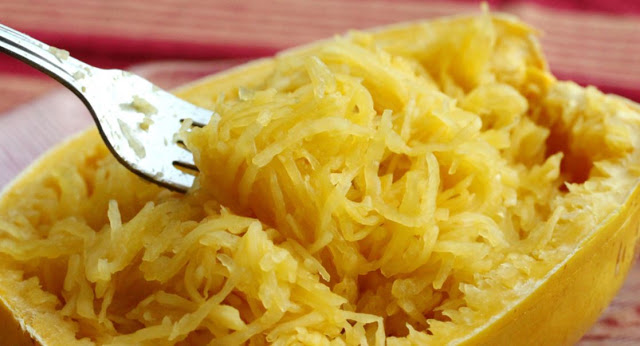 Spaghetti squash and I are best pals.
I mean, seriously, let’s talk about this magical little veggie. It’s low calorie with only 31 calories per cup. That means you can eat a huge portion – let’s say 3 cups if you are ambitious – for under 100 calories. The same amount of pasta would have six times as many calories. It’s also low carb, gluten free, plant based, Paleo friendly, clean eating friendly – I mean it works on pretty much any diet. Win. And then let’s talk about the most important thing – it’s delicious and super versatile. You can use it to replace pasta in almost any recipe, it’s delicious in Asian stir-fries, it makes an excellent side dish, it can be even be used as a pizza crust! (Looking for spaghetti squash recipes, click here.)
Now that you are hopefully convinced that spaghetti squash is the best thing ever. Let’s talk about how to cook it.

Much like roasting squash, when you microwave squash you can do it as a whole squash, halves, or in smaller pieces. Since cooking time doesn’t change much (like it does with roasting), I usually stick to the whole squash since it requires the least amount of prep. To microwave a whole squash, pierce it all over with a fork or paring knife. This step is very important or the squash will explode. Then microwave it for 10-12 minutes (varies based on oven strength) until its tender to the touch. Then very carefully cut in half, remove the seeds, and scrape out squash strands. For spaghetti squash halves, set them in a container with about 1 inch of water, flesh side down. Microwave for 8-10 minutes until tender and squash can be easily scraped out. For squash pieces (quarters or eighths), place in a microwave safe container with a lid. Add about 1/4 cup water to the dish and cover. You can season the squash here as well. Microwave for 6-8 minutes or until tender.

Many people don’t know that you can cook your spaghetti squash right in the slow cooker. To cook the whole squash, pierce all over with a fork or knife. Then add to the slow cooker whole with 1 cup of liquid – water, broth, etc. Cook on high for 4 hours or low for 8 hours. You can also cook spaghetti squash halves in the slow cooker the same way. Cutting the squash in half cuts off about 1 hour of cooking time. Fun note! As long as you clean the outside of the squash well, you can actually cook the squash (halved is better so they absorb flavor) in a slow cooker sauce like Bolognese. Just add everything you need for the sauce to the slow cooker then nestle the squash halves into the sauce flesh side down. They will cook alongside the dish and then you can just scrape out the squash when you are done cooking. No separate cooking required!

The final method for cooking spaghetti squash is on the stovetop in boiling water or using a steamer. The easiest way to do this is to cut the squash up into pieces and boil in broth or water for 15-20 minutes until tender. It is possible to boil a whole squash, but it takes a long time and I find the flavor isn’t as good so I don’t recommend it.